Bridgestone Partners with Seven Inspiring U.S. Olympic and Paralympic Athletes on the Road to Tokyo 2020 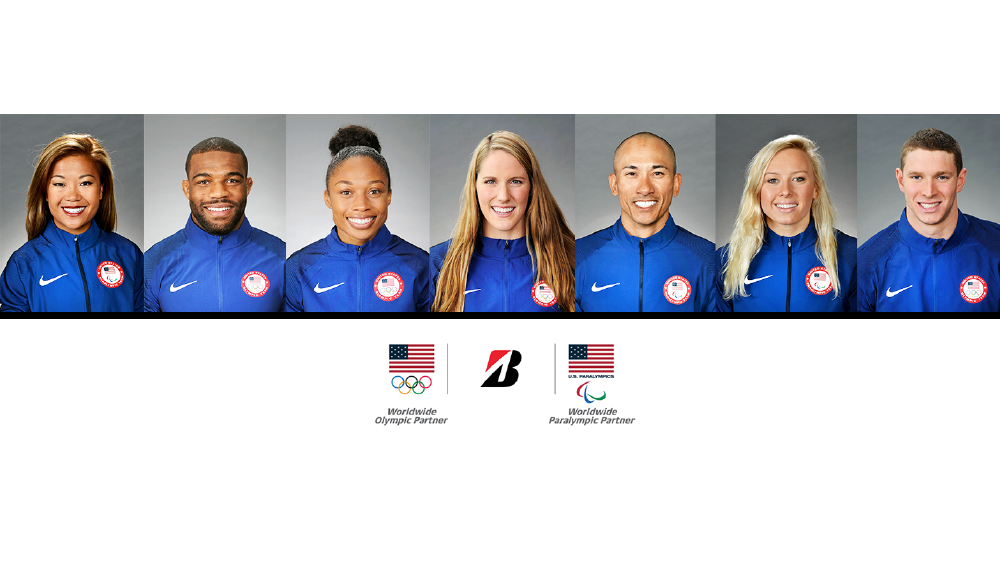 Scout Bassett (Para track and field), Jordan Burroughs (wrestling), Allyson Felix (track and field), Missy Franklin (swimming), Will Groulx (Para-cycling), Jessica Long (Para swimming), and Ryan Murphy (swimming) have joined Team Bridgestone to serve as athlete ambassadors for the upcoming Olympic and Paralympic Games, which will be held in the company’s global hometown. With a combined 48 Olympic and Paralympic medals, this accomplished group has demonstrated the ability to deliver clutch performance in the biggest moments and inspire others through their passion and perseverance.

“Bridgestone is committed to improving the way people move, live, work, and play, and these efforts are reflected in our support of the Olympic and Paralympic movements and their world-class athletes,” said Gordon Knapp, CEO and President, Bridgestone Americas. “While our new Team Bridgestone ambassadors certainly have an impressive list of athletic accomplishments, we are most excited to celebrate the personal journeys behind their achievements. These remarkable individuals have unique experiences to share that can help motivate people of all backgrounds and abilities to overcome obstacles and chase their dreams.”

Bridgestone is a proud partner of the U.S. Olympic Committee and U.S. Paralympics through 2024, and Tokyo 2020 marks the third straight Olympic and Paralympic Games that the company has worked with a roster of Team USA athletes.

Team Bridgestone athlete ambassadors are selected based on criteria related to the company’s core values, their personal stories, performance attributes, and community involvement. Each athlete will receive financial support and access to cutting-edge Bridgestone products and technologies. They also will participate in community, customer and employee activities before, during and after the Olympic and Paralympic Games Tokyo 2020.

Scout Bassett lost her right leg in a chemical fire as an infant, then was abandoned and subsequently spent seven years in a government-run orphanage in Nanjing, China. In 1995, she was adopted by an American couple from Michigan and tried a variety of sports to connect with her peers while still learning the English language. At 14, the Challenged Athletes Foundation (CAF) awarded Bassett a grant to fund her training as a runner. She competed collegiately for University of California, Los Angeles (UCLA), where she graduated in 2011 with degrees in Sociology and Anthropology. Now a rising star in Para track and field, Bassett is a three-time U.S. national champion in the 100-meter event and a world championship bronze medalist in both the 100-meters and the long jump. She competed at the Paralympic Games Rio 2016, placing fifth in the 100-meter event and tenth in the long jump. The 30-year-old is passionate about helping impaired athletes chase their dreams, and now serves as a motivational speaker and spokesperson for CAF.

Jordan Burroughs began wrestling as a five-year-old, the first person in his family to take up the sport. He won his first national championship as a senior in high school, then became a two-time undefeated Division I national champion and a three-time All-American in college for the University of Nebraska. He jumped straight into the international wrestling scene after graduating with a degree in Sociology, winning the U.S. Open at 74 kilograms just three weeks after his final college match. He won his first world championship at 74 kilograms in 2011, becoming just the fourth wrestler ever to win a NCAA championship and world championship in the same year. Burroughs won gold at 74 kilos at the Olympic Games London 2012 and has since added three more world championships. Despite failing to medal in a disappointing performance at the Olympic Games Rio 2016, Burroughs’ candor after elimination was a source of inspiration for his fellow athletes and Olympic fans alike. Fresh off his third Pan Am Championships title, the 30-year-old is motivated to make his third-straight Olympic appearance in Tokyo. He lives and trains in Lincoln, Nebraska with his wife and two children.

Allyson Felix didn’t begin competing in track and field until high school, late by most sporting standards. Today, she is the most decorated athlete in track and field history and a four-time Olympian (2004, 2008, 2012, 2016) for Team USA. Over the course of her storied career, Felix has won nine Olympic medals (six gold, three silver), 16 world championship titles, and still holds a world record as a member of the U.S. 4x100-meter relay team at the Olympic Games London 2012. While she has competed in the 100-meter, 200-meter, 400-meter, and the 100- and 400-meter relay events, she now focuses on the 400-meter and team relays. Felix pursues her passion with determination both on and off the track, and has said her work with children is just as important as her athletic accomplishments. The 33-year-old currently serves as a board member for Right to Play, which raises awareness for underserved children in developing regions. Felix and her husband welcomed their first child – a daughter – in November 2018, giving her new motivation as she returns to training for Tokyo 2020.

Missy Franklin is an U.S. swimming legend and a six-time Olympic medalist. She began swimming at age 2 and competed in her first international event at 14. Franklin became a household name as a 17-year-old at the Olympic Games London 2012 when she won five medals (four gold, one bronze) and broke the world record in the 200-meter backstroke. In her two years of college competition at UC Berkeley before turning pro, Franklin won four individual NCAA titles and helped the school win the 2015 NCAA Women’s Division I Swimming and Diving Team Championship. She also was named the 2015 Collegiate Woman of the Year and won the Honda Cup as the top female athlete across all collegiate sports. Franklin made her second U.S. Olympic Team in Rio 2016, where she earned her fifth career gold medal as part of the 4x200m free relay team. She retired from competitive swimming in December 2018 due to chronic shoulder issues. Today, the 24-year-old is working to complete her bachelor’s degree at the University of Georgia while continuing to champion her sport through speaking engagements and her work with various foundations.

Jessica Long was inspiring people around the world even before she became the second-most decorated Paralympian in U.S. history with 23 Paralympic medals. Long grew up in Baltimore, Md., but is originally from Siberia, where she was adopted from a Russian orphanage at 13 months old. Born with fibular hemimelia, she was missing the fibulas, ankles, heels, and most of the other bones in her feet. At 18 months old, her legs were amputated below the knees so she could be fitted for prosthetic legs and learn to walk. Long fell in love with swimming in her grandparents’ backyard pool and joined her first competitive swim team at the age of 10. Just two years later, she competed in the Paralympic Games Athens 2004 as the youngest athlete on Team USA. Now 27 years old, she has collected 13 Paralympic gold medals, 31 world titles, and multiple world records. Long has inspired others to chase their dreams throughout her career, and she has found a new sense of purpose through giving back to the sports community, advocating for the Paralympic Games and Para-athletes, and showing young girls they are valuable and strong. She continues to train in Baltimore with eyes on a fifth-straight Paralympic appearance at Tokyo 2020.

Ryan Murphy started breaking records as soon as he started swimming and has quickly emerged as one of the biggest stars in the sport. He set numerous American and NCAA records while at the University of California, Berkeley, where he won both the 100-meter and 200-meter backstroke events at the NCAA Championships for four straight years, and today is the current World Record holder in the 100-meter backstroke. Murphy won three golds in his Olympic debut at the Rio 2016, sweeping the backstroke events and helping the U.S. win gold in the 4x100m medley relay. He turned pro in 2017 and has quickly emerged as one of the most dominant swimmers in the world. The 23-year-old swept the backstroke events at the 2018 Pan Pacific Swimming Championships, won six medals (three gold and three silver) at the 2018 Swimming World Championships in Hangzhou, China, and was named the 2018 Male Athlete of the Year by USA Swimming at its annual Golden Goggle Awards. A native of Jacksonville, Fla., Murphy lives in Oakland, Calif. and is currently training to make his second-straight Olympic appearance in Tokyo where he can become the first American to sweep the backstroke events at two different Olympic Games.

Bridgestone Corporation, the world’s largest tire and rubber company, proudly became a Worldwide Olympic Partner in 2014 and a Worldwide Paralympic Partner in 2018. These long-term agreements extend through 2024 and include support for the Olympic and Paralympic Games Tokyo 2020, Beijing 2022 and Paris 2024. The company is dedicated to delivering products, services and solutions that improve the way people move, live, work and play, and its commitment to the Olympic Movement and Paralympic Movement continues a history of sport and innovation dating back more than 100 years. Bridgestone Olympic and Paralympic activities are guided by a global “Chase Your Dream” message, which intends to inspire people to overcome obstacles and persevere in pursuit of their goals. As a worldwide partner, Bridgestone has marketing rights that include its full range of tyres, tyre services and selected automotive vehicle services, self-propelled bicycles, seismic isolation bearings, and a variety of building and industrial products.