Today Bridgestone Brazil announced an additional investment in its tire production plant in Camaçari, in the state of Bahia. Keeping up with the growing market demand for high-performance tires, the company is investing more than R$ 270 million in the modernization and expansion of the factory, which brings the company's total investments announced since 2021 to more than R$ 970 million for the Bahia plant.

Vicente Marino, president of Bridgestone Latin America South, attended the official ceremony alongside Rui Costa, governor of the State of Bahia and his team. “This investment is part of our strategic plan for sustainable growth in Brazil, focused on the premium tire market and the production of tires for more sustainable and electric/hybrid vehicles, which reinforces our commitment and the country's strategic position for the company’s global business,” said Vicente. “This expansion is also a major capability play for Bridgestone, as we look to delivery on sustainable solutions journey with products that will be incorporated with digital readiness.”

This second phase of expansion and modernization of the Bahia plant will allow for an increase in production capacity, generating 126 new permanent jobs. Tire production will increase, thanks to new manufacturing technologies and the growing application of industry 4.0 concepts, including artificial intelligence control technology that increases productivity and the application of knowledge and data in a digital manufacturing environment. Aligned with the company's vision of generating social and customer value, Bridgestone's plant in Camaçari is preparing for growth in demand for electric/hybrid and sustainable vehicles – and the high-performance tires to equip them.

The Bridgestone plant in Bahia, which opened in 2006, employs more than 1,300 people. It produces tires for passenger vehicles, vans and pick-up trucks, intended for the original equipment manufacturers, replacement and export markets. The Bahia plant achieved another milestone with its earlier expansion in 2016, undertaken 10 years after it began operations. Bridgestone has already invested nearly R$1.5 billion in expanding the facility’s production structure from 2006 to 2020. 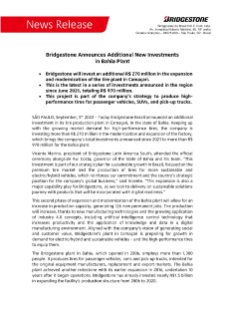 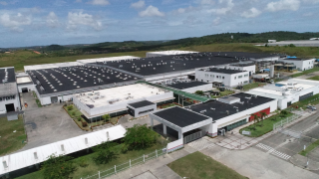