Bridgestone Americas, Inc. (Bridgestone), today announced it is committing $200,000 to the National Hockey League Foundation in support of diversity and inclusion initiatives that will create more access to the sport for children and youth in two cities that represent hockey’s growing reach.

The donation, which is partially funded by the Bridgestone Americas Trust Fund, will help benefit the Vegas Golden Knights Foundation and the Nashville Predators Foundation and support new community outreach projects in Las Vegas and Bridgestone’s hometown of Nashville. The announcement coincides with the newly-created Bridgestone NHL Outdoors SaturdayTM event between the Vegas Golden Knights and Colorado Avalanche that will be played in a unique outdoor setting in Lake Tahoe on February 20.

“Bridgestone strives every day to create a workplace that celebrates equality and promotes diversity and we want to work with partners who can help extend these efforts into our communities,” said Paolo Ferrari, CEO and president, Bridgestone Americas. “We’ve seen how sports can create new opportunities, build networks of structure and support, and ultimately help drive positive social change. Together, we can develop solutions that help build a more inclusive world for tomorrow’s generations.”

“We are thrilled to work with Bridgestone, a longstanding NHL partner, on projects that intentionally empower children from diverse backgrounds to experience the benefits of hockey,” said Kim Davis, NHL Senior Executive Vice President of Social Impact, Growth Initiatives & Legislative Affairs. “The brand-new ball hockey rink in Las Vegas and Nashville Predators Youth Hockey Diversity program are two powerful examples of the movement for inclusion that is accelerating across the hockey community. The NHL and the NHL Foundation are proud to have a partner in Bridgestone as we continue our efforts to ensure hockey is for everyone by engaging grassroots communities who represent the future of our game.”

In Las Vegas, Bridgestone’s support will help the Vegas Golden Knights Foundation in its partnership with star right winger Ryan Reaves to build a ball hockey rink for the James Boys and Girls Club of Southern Nevada. The project will create a place for underserved youth to learn the game of hockey, but it will also provide a flexible activity space that can offer a safe environment for additional sport programs, Golden Knights watch parties, and community social events.

“The main goal is to bring hockey to a community that has not been exposed to it before,” said Vegas Golden Knight Ryan Reaves. “By doing this, we can educate and then integrate these communities into the sport within the city of Las Vegas through various programs”

In Nashville, Bridgestone’s donation will fully fund the Nashville Predators Youth Hockey Diversity program in its first year. The impact of this new initiative, which aims to significantly reduce the barrier of entry to the game of hockey for minority communities, will extend far into the future as young Nashvillians learn to love the sport for years to come. The Preds Youth Hockey Diversity program will not only introduce hockey to players between the ages of four and eight and support their development through various stages of instruction and league competition, but also do so at a low or no cost. In structuring this program to cover equipment, coaching and ice time expenses, among others, children of all backgrounds will have the opportunity to learn and grow from the many benefits of hockey.

“Being involved in youth hockey and helping grow the game is something I’m passionate about, and since my first day in Nashville, I’ve been able to see how special the hockey community is here,” said Nashville Predator Ryan Johansen. “With help from Bridgestone, the Preds Youth Hockey Diversity program will help us take what we’ve all built together over the last few years and make it even better and stronger. I want to commend the Predators and Bridgestone for their help and commitment to grow youth hockey in Middle Tennessee and make it more accessible than it’s ever been.”

Bridgestone has proudly backed the Nashville Predators since 2010 as naming rights partner for Bridgestone Arena, which is located across the street from the company’s Americas headquarters in downtown Nashville. Bridgestone has partnered with the Vegas Golden Knights for the past three years with a focus on increasing engagement with fans and local customers in a key business region.

Bridgestone NHL Outdoors SaturdayTM is the opener of the two-day NHL Outdoors at Lake Tahoe™ series, which features two regular-season outdoor games along the shore of North America’s largest alpine lake on February 20 and 21. Both games will be broadcast at 3 p.m. ET on NBC in the United States and on Sportsnet and TVA Sports in Canada.

The National Hockey League (NHL®), founded in 1917, consists of 31 Member Clubs and proudly welcomes its 32nd franchise, the Seattle Kraken™, for the 2021-22 season. Each team roster reflects the League’s international makeup with players from more than 20 countries represented, all vying for the most cherished and historic trophy in professional sports – the Stanley Cup®. Every year, the NHL entertains more than 670 million fans in-arena and through its partners on national television and radio; more than 151 million followers - league, team and player accounts combined - across Facebook, Twitter, Instagram, Snapchat and YouTube; and more than 100 million fans online at NHL.com. The League broadcasts games in more than 160 countries and territories through its rightsholders including NBC/NBCSN and the NHL Network™ in the U.S., Sportsnet and TVA in Canada, Viaplay in the Nordic Region and CCTV and Tencent in China. The NHL reaches fans worldwide with games available online in every country including via its live and on-demand streaming service NHL.TV™. Fans are engaged across the League’s digital assets on mobile devices via the free NHL® App; across nine social media platforms; on SiriusXM NHL Network Radio™; and on NHL.com, available in eight languages and featuring unprecedented access to player and team statistics as well as every regular-season and playoff game box score dating back to the League’s inception, powered by SAP. The NHL is committed to building healthy and vibrant communities through the sport of hockey by increasing youth participation and engagement; fostering positive family experiences; promoting inclusion, positive culture and leadership; and supporting sustainable community impact.

About The Vegas Golden Knights:

The Vegas Golden Knights are a National Hockey League franchise owned and operated by Black Knight Sports and Entertainment LLC. The Vegas Golden Knights were established by founding partners William Foley and his family and the Maloof family. For the latest news and information on the Golden Knights visit vegasgoldenknights.com. Fans can follow the team on Facebook, Twitter, Instagram and Snapchat.

About the Nashville Predators Foundation empowered by SmileDirectClub: 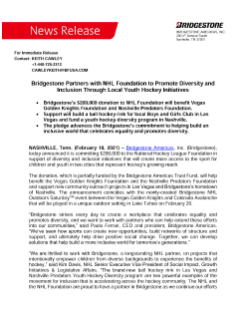 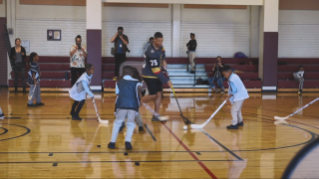 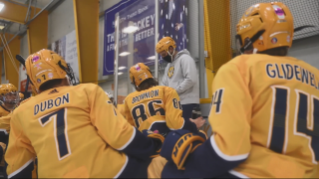 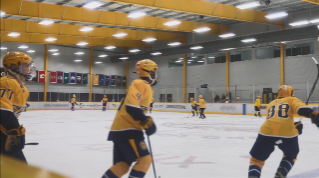