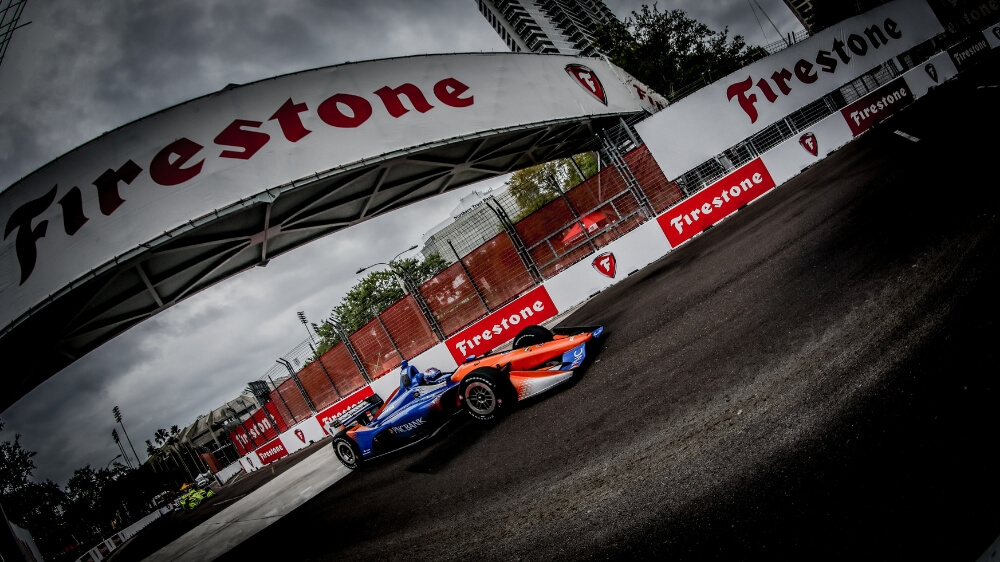 INDYCAR and Bridgestone Americas, Inc. (Bridgestone) today announced a five-year partnership extension for the Firestone brand to continue serving as the sole tire supplier and Official Tire of the NTT IndyCar® Series through 2025. The agreement, which includes continued rights for Firestone as the Official Tire of the Indianapolis 500®, furthers the brand’s storied history in open-wheel racing and its longstanding commitment to tire innovation.

The news was shared at a special event in Indianapolis that included INDYCAR and Bridgestone leaders, racing legend Mario Andretti, and veteran INDYCAR driver and team owner Ed Carpenter. A second event also was held at the Bridgestone Americas Technical Center in Akron with two-time Indy 500 winner Al Unser Jr.

“Champions have relied on Firestone tires for more than a century, and racing has always been the ideal proving ground for new technologies that help us evolve and advance our company’s passenger tire offerings,” said Philip Dobbs, chief marketing officer, Bridgestone Americas Tire Operations. “As the NTT IndyCar Series continues gaining momentum, we are introducing new fans to the Firestone brand and strengthening our relationship with the drivers who use our durable, dependable Firestone tires.”

“Firestone has long been a great INDYCAR partner and is making a huge investment to the NTT IndyCar Series with its new facility in Akron,” INDYCAR president Jay Frye said. “This extension also reflects Firestone’s commitment to helping to shape INDYCAR’s paddock-wide, five-year plan.”

Firestone is entering its 20th consecutive season as the sole tire supplier of the NTT IndyCar Series. It will produce and deliver more than 26,000 Firehawk race tires to teams across the upcoming 2019 schedule, including more than 6,000 tires for track activities related to the Indianapolis 500 alone. The brand’s roots in the sport date back to 1911 when the inaugural Indianapolis 500 was won on Firestone tires. In all, “The Greatest Spectacle in Racing” has been won on Firestone tires 69 times – more than double all other tire manufacturers combined.

“I started driving on Firestone tires 55 years ago, and they were on my car for the 1969 Indianapolis 500 when I took the checkered flag,” said Mario Andretti. “The trust I have always placed in Firestone was cemented that day 50 years ago when I drove on the same right rear tire for the whole race – and it never let me down. Firestone has always been a dependable partner, and I am excited to see its partnership with INDYCAR continue.”

The new ATPC will continue a legacy of tire manufacturing in Akron that began with the founding of the Firestone Tire and Rubber Company in 1900. A team of more than 50 expert tire builders and manufacturing professionals at the Advanced Technology Workshop currently keeps that tradition alive through the production of more than 60 unique race tire specifications for the NTT IndyCar Series season. All race tire manufacturing will move to the new facility over the next four years, and early plans are for the site to produce its first Firestone Firehawk race tires for testing in the NTT IndyCar Series by the end of 2020.

“The Akron community and race tire development have each played significant roles in our company’s past, and they will continue to drive innovation for us in the future,” said Nizar Trigui, chief technology officer, Bridgestone Americas. “We are proud to ensure that Firestone race tires will be built in Akron for many years to come, soon in a new facility that will be as cutting-edge as the tires it produces.”

In addition to providing tire technology and on-track support, Firestone will continue to be a key partner in the marketing and promotion of the NTT IndyCar Series. The brand’s comprehensive, season-long activation includes fan engagement, sponsorships and signage at multiple venues, robust social and digital media programs, traditional media, and hospitality.

The 2019 NTT IndyCar Series season kicks off March 10 with the Firestone Grand Prix of St. Petersburg, which will be broadcast live on NBCSN at 1:00 PM ET. Firestone also recently announced it will serve as title sponsor of the season-ending Firestone Grand Prix of Monterey at WeatherTech® Raceway Laguna Seca, which will be broadcast live on NBC on September 22 at 2:30 PM ET.

INDYCAR is the governing body of: the NTT IndyCar Series, the premier open-wheel racing series in North America. INDYCAR events are available to a worldwide audience through a variety of multimedia platforms, highlighted by a broad-reaching partnership with NBC Sports Group. INDYCAR is continually at the forefront of motorsports innovation with drivers, teams and tracks benefiting from safety and technological improvements such as the SAFER Barrier, SWEMS wheel and chassis component tethers, chassis enhancements, advanced aerodynamic bodywork kits, high-definition in-car cameras and E85 ethanol fuel.

Nashville, Tennessee-based Bridgestone Americas, Inc. (BSAM) is the U.S. subsidiary of Bridgestone Corporation, the world’s largest tire and rubber company. BSAM and its subsidiaries develop, manufacture and market a wide range of Bridgestone, Firestone and associate brand tires to address the needs of a broad range of customers, including consumers, automotive and commercial vehicle original equipment manufacturers, and those in the agricultural, forestry and mining industries. The companies are also engaged in retreading operations throughout the Western Hemisphere and produce air springs, roofing materials and industrial fibers and textiles. The BSAM family of companies also operates the world’s largest chain of automotive tire and service centers. Guided by its global corporate social responsibility commitment, Our Way to Serve, the company is dedicated to improving the way people move, live, work and play in all of the communities it calls home.