An unheard-of action, created in partnership with VML, which aims to activate the sponsorship at CONMEBOL Libertadores 2019 Tournament 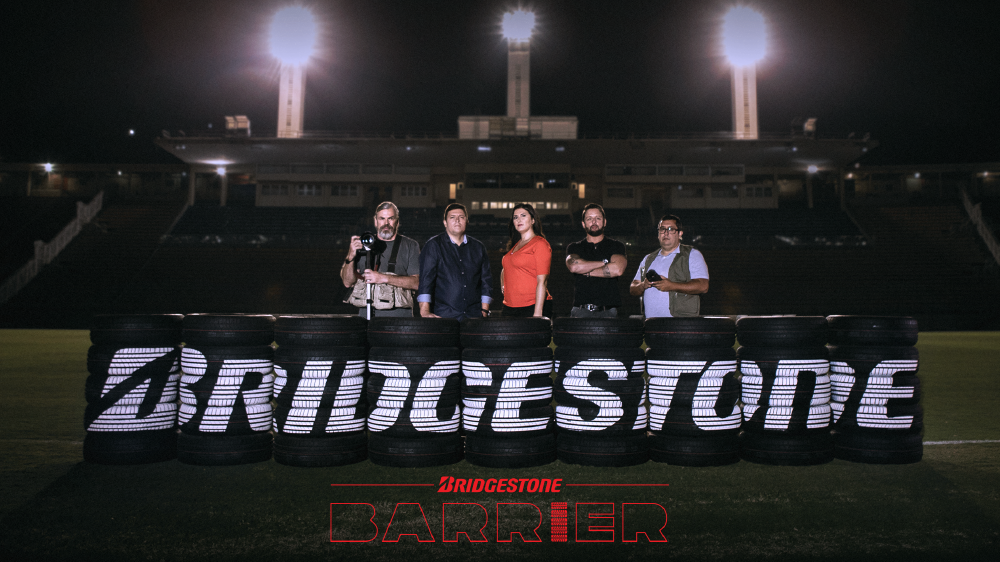 The life of the journalists, photographic reporters, and cameramen who work on the side lines of soccer fields is not easy by any stretch. Besides the concentration and physical fitness needed in order to capture the best angles of the game, they have to be extremely agile to avoid being hit by a ball or run over by a player. And that right there is Bridgestone Barrier’s main purpose: to protect these professionals and their equipment from the occasional accident. This innovative initiative, the brain child of VML agency, is the first in a series of actions that Bridgestone, the world’s largest tire manufacturer, will undertake throughout the year to activate the sponsorship of CONMEBOL Libertadores 2019 Tournament.

Bridgestone, which has just renewed the sponsorship of Latin America’s most important soccer tournament until 2022 and has extended their partnership to the South American CONMEBOL championship, continues its strategy of investing in innovations that bring closer together customers and their passions, such as soccer. For the first time ever, a static, conventional billboard will become a tire barrier. The brand’s marketing action will be seen in the field today, during the game between Flamengo and Bolivia’s San Jose at Maracana stadium, in Rio de Janeiro.

“The tire is the only point of contact between the vehicle and the ground and is an essential safety item. The action will also reinforce other traits of the brand, such as performance and technology. With this unprecedented initiative, we are bringing our product into the field to protect and assist journalists, as we do with our clients and their passions”, remarks Oduvaldo Viana, Bridgestone’s Marketing Director.

Bridgestone Barrier has undergone several tests to ensure it is properly held in place, in compliance with all of CONMEBOL’s safety criteria. The device will have a metallic structure with the same dimensions as the current static billboards and a “band” consisting of 45 tires, where the Bridgestone brand will be printed.

“Instead of using third-party technology to make a digital billboard, we have decided to bet on a 100% analogical billboard, using our client’s own cutting-edge technology – their superior tire quality – and create a truly unprecedented field activation that will help tell Bridgestone’s sponsorship apart from all the others”, states Adriano Abdalla, VML’s Creative VP

To increase the visibility generated by the TV broadcasts, during the match, there will be activations with soccer influencers in social media, In addition, branded content actions are also planned to promote the Bridgestone Barrier on sports TV shows.

Headquartered in Tokyo, Japan, Bridgestone is the world’s largest tire and rubber company (according to research done by Tire Business – Global Tire Company Rankings based on tire sales in 2016). Besides tires for a wide variety of applications, Bridgestone also operates in the segments of air springs, chemical products for civil engineering applications (for example, impermeabilization materials), industrial rubber, and sports goods among others. Its products are sold in over 150 countries around the world.

Bridgestone do Brasil is a subsidiary of Bridgestone Americas Tire Operations Latin America (BATO LA), which by its turn is a subsidiary of Bridgestone Americas, Inc., (BSAM) with headquarters in Nashville, Tennessee. BSBR owns two tire plants in the cities of Santo Andre, state of Sao Paulo, and Camaçari, state of Bahia, and two tire retreading plants in the cities of Campinas, state of Sao Paulo, and Mafra, state of Santa Catarina. The company owns the brands Bridgestone and Firestone of tires for passenger cars, pick-up trucks, trucks and buses, tractors and off-road, and industrial vehicles, and the brand Bandag of treads for retreading. The company serves the Brazilian aftermarket, comprising the whole network of resellers, and the original equipment market, formed by the automotive assembly plants, and also exports to countries in South and Central America, the Caribbean, Mexico, and the United States.