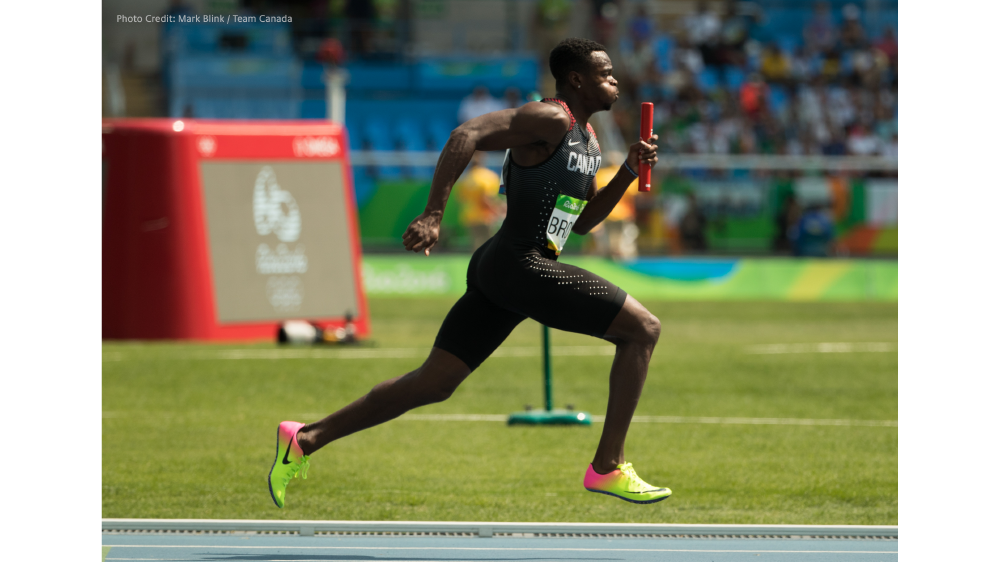 Brown joins Team Bridgestone as its first-ever Canadian athlete ambassador and will represent the company as he aims to qualify for his third straight Olympic Games next summer. A speed specialist, Brown was part of Canada’s bronze medal-winning 4x100m relay team at the Olympic Games Rio 2016 and is the reigning back-to-back 2018 and 2019 Canadian National Champion in both the 100-meter and 200-meter events – a remarkable double-double achievement for any sprinter. Over the course of his career, he has demonstrated the ability to deliver clutch performance in the biggest moments and inspire others through his passion and perseverance both on and off the track.

“It’s truly an honor to represent Bridgestone and be the first Team Bridgestone athlete ambassador in Canada,” said Brown. “My career has always been about speed and performance, but like every world-class athlete, I’ve faced my fair share of adversity. I’m proud to work with a partner that not only supports the Olympic and Paralympic Games at the highest level, but also is committed to empowering people to push through obstacles and achieve their goals.”

“Bridgestone is proud to support the Olympic Movement, the Paralympic Movement, and inspiring athletes around the world as part of our ongoing commitment to improving the way people move, live, work and play,” said Gordon Knapp, CEO and President, Bridgestone Americas. “Aaron’s passion for performance and commitment to his craft have the ability to motivate people of all backgrounds and abilities to overcome adversity and chase their dreams. We look forward to celebrating and supporting his journey as he trains to represent Canada at a third straight Olympic Games.”

Team Bridgestone athlete ambassadors are selected based on criteria related to the company’s core values, their personal stories, performance attributes, and community involvement. Each athlete receives financial support and access to cutting-edge Bridgestone products and technologies. They also will participate in community, customer and employee activities before, during and after the Olympic and Paralympic Games Tokyo 2020.

Bridgestone also is a proud partner of the Canadian Olympic Committee through 2024 and will support Team Canada in a variety of ways on the Road to Tokyo 2020.

Aaron Brown is a two-time Olympian and one of only two Canadians to ever record both a time under 10 seconds in the 100-meters and a time under 20 seconds in the 200-meters. A native of Toronto, Ontario, Brown won a silver medal at the World Youth Championships in 2009 while attending Birchmount Park Collegiate Institute before becoming an eight-time first team All-American as a collegiate sprinter at the University of Southern California. Brown advanced to the semifinals of the 200-meters in his Olympic Games debut at London 2012, then collected his first Olympic Games medal as a member of Canada’s bronze medal-winning 4x100-meter relay team at Rio 2016. Brown was named Athletics Canada Track Athlete of the Year in 2018 after winning Canadian national titles in both the 100-meters and 200-meters, and he was named Summer Male Athlete of the Year at the Canadian Sports Awards in 2019 after successfully defending both titles for a rare double-double feat. Off the track, Brown is an active committee member for Athletics Ontario Track and Field, and he has worked to support local community causes related to mental health and depression, including the National Alliance on Mental Illness (NAMI). He has also been awarded the Queen Elizabeth II Diamond Jubilee Medal, which is awarded to honor significant contributions and achievements by Canadians.

Bridgestone Corporation, headquartered in Tokyo, is the world’s largest tire and rubber company and operates with a mission of “Serving Society with Superior Quality.” Bridgestone proudly became a Worldwide Olympic Partner in 2014 and a Worldwide Paralympic Partner in 2018. The company has global rights to the Olympic Movement and Paralympic Movement through to 2024, a period that includes the Olympic and Paralympic Games Tokyo 2020, Beijing 2022 and Paris 2024. Bridgestone is dedicated to delivering products, services and solutions that improve the way people move, live, work and play, and its commitment to the Olympic Movement and Paralympic Movement continues a history of sport and innovation dating back more than 100 years. Bridgestone activities related to its Worldwide Olympic and Paralympic Partnerships are guided by a global “Chase Your Dream” message, which intends to inspire people to overcome obstacles and persevere in pursuit of their goals. As a worldwide partner, Bridgestone has marketing rights that include its full range of tyres, tyre services and selected automotive vehicle services, self-propelled bicycles, seismic isolation bearings, and a variety of building and industrial products.

All Bridgestone activities related to its Worldwide Olympic and Paralympic Partnerships are designed to empower people of all abilities to persevere through adversity and "Chase Your Dream." In support of these efforts, the company is partnering with more than 55 inspiring Olympic and Paralympic Games athletes and hopefuls across 16 countries to serve as Team Bridgestone brand ambassadors on the Road to Tokyo 2020.