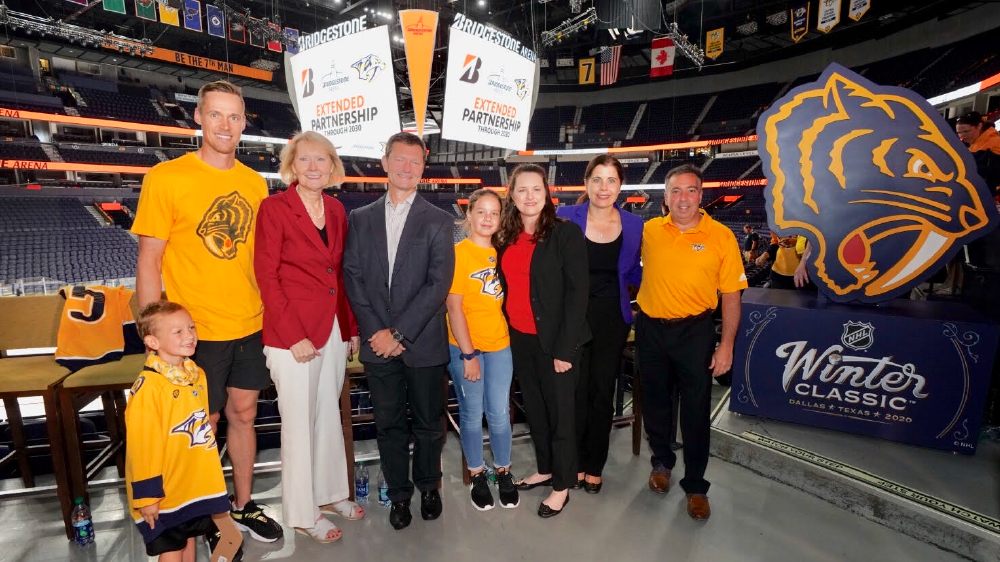 Bridgestone Americas, Inc. (Bridgestone) and the Nashville Predators today jointly celebrated the beginning of a new hockey season by announcing an extension to their naming rights agreement for Bridgestone Arena through 2030. The agreement adds five more years to the successful partnership that began in March 2010 between the world’s largest tire and rubber company and downtown Nashville’s award-winning sports and entertainment venue.

The announcement comes less than two years after the deal’s previous extension, which was finalized in December 2017 to carry the successful partnership through 2025. Bridgestone revealed that previous extension in conjunction with the grand opening of Bridgestone Tower, its new Americas headquarters that is located across the street from the arena that bears its name.

“Our partnership with Nashville Predators and our association with this world-class arena continue to be great sources of pride and positive exposure for the Bridgestone brand,” said Gordon Knapp, CEO and president, Bridgestone Americas. “Extending our relationship for the next eleven years represents the longest sports partnership commitment in our company’s history, which is a reflection of our belief in the Middle Tennessee community and the incredible vision of our hometown hockey franchise.”

Bridgestone and the Predators celebrated the new extension as part of the team’s annual season-opening Preds Fest at the arena. The announcement was punctuated by the official unveiling of the arena’s new scoreboard, FangVision – a massive, state-of-the-art video centerpiece that will hang above the Predators’ home ice. Complete with four illuminated fangs on its corners and 4.2 million LED pixels, the structure has nearly 300 percent more primary board size than its predecessor. While the new scoreboard was operational during the preseason, Preds Fest marked the first full-scale reveal of its capabilities.

“Bridgestone Americas has been a driving force behind the Nashville Predators and Bridgestone Arena from the moment they helped save and stabilize the team for all of Smashville over 10 years ago,” said Sean Henry, President and CEO of the Nashville Predators. “They believed in our city and the impact a thriving team could have upon it, and by aligning their brand with ours gave us a foundation from which we could successfully build. Our year over year growth on virtually every front and our current upward trajectory we enjoy is directly linked to their renewed faith in what we can achieve together. It is no coincidence that our alignment with Bridgestone has driven us to become one of the busiest venues in North America centered around a perennial Stanley Cup contending Nashville Predators team. With downtown Nashville being each of our forever homes, it is natural for our partnership to continue that long as well.”

In its nine years as Bridgestone Arena, the venue has firmly established itself as a local landmark and the anchor of Nashville’s Lower Broadway – one of North America’s most popular tourist destinations. The arena continues to break attendance records while annually hosting more than 1 million people, and its ability to deliver a world-renowned fan experience has garnered recognition across the industry. Recent highlights include:

These accomplishments reflect Bridgestone Arena’s continued focus on one primary mission, which is to be the No. 1 sports and entertainment venue in North America with a Stanley Cup Champion Nashville Predators franchise as its centerpiece.

Nashville, Tenn.-based Bridgestone Americas, Inc. (BSAM) is the U.S. subsidiary of Bridgestone Corporation, the world’s largest tire and rubber company. BSAM and its subsidiaries develop, manufacture and market a wide range of Bridgestone, Firestone and associate brand tires to address the needs of a broad range of customers, including consumers, automotive and commercial vehicle original equipment manufacturers, and those in the agricultural, forestry and mining industries. The companies are also engaged in retreading operations throughout the Western Hemisphere and produce air springs, roofing materials, and industrial fibers and textiles. The BSAM family of companies also operates the world’s largest chain of automotive tire and service centers. Guided by its global corporate social responsibility commitment, Our Way to Serve, the company is dedicated to improving the way people live, work, move and play in all of the communities it calls home.

Serving as the home for numerous national and international events, Bridgestone Arena has the distinction of being one of the busiest venues in the Unites States since the doors first opened in 1996, hosting more than 23 million guests during that time. The NHL’s Nashville Predators have been the primary tenants of Bridgestone Arena since 1998 and boast one of the most unique game atmospheres in the NHL. The list of acts that have called the 2017 Pollstar and IEBA Arena of the Year home is lengthy and includes the Country Music Association Awards; the Country Music Television Awards; and the SEC Basketball Tournament through 2035.

About the Nashville Predators

The Nashville Predators became the National Hockey League’s 27th team on May 4, 1998 and have evolved from a young expansion franchise into a staple of the Middle Tennessee community in the 20 years since. The team strives each season to reach its One Goal: becoming a Stanley Cup Champion hockey team while making Bridgestone Arena the number one sports and entertainment venue in the United States. With One Goal in mind, the team has seen historic success the past three seasons, advancing to the Stanley Cup Final in 2016-17, winning the President’s Trophy and Western Conference regular-season title in 2017-18, and claiming its second consecutive Central Division title in 2018-19.