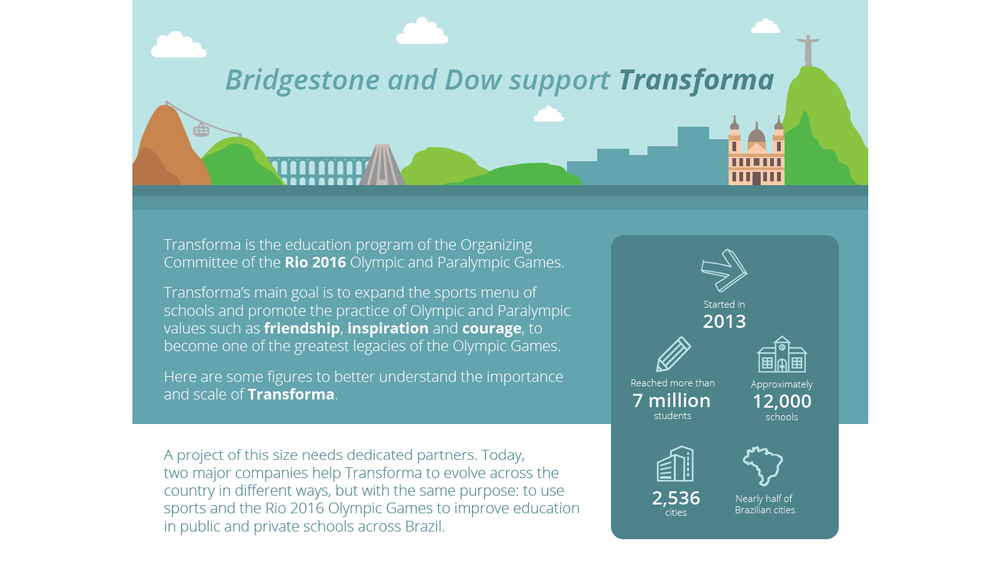 Bridgestone has a history of supporting sports in Brazil, and we are proud that through our Worldwide Olympic Partnership we can help advance a social legacy through sports and education.

In an effort to create new educational opportunities for students and teachers across Brazil, The Dow Chemical Company (NYSE: DOW), a global leader in science and innovation, and Bridgestone Corporation, the world’s largest tire and rubber company, worked with key stakeholders in cities throughout Brazil to support and evolve Transforma, the official education program of the Rio 2016 Olympic and Paralympic Games.

The collaboration of the two Worldwide Olympic Partners helped the Rio Organizing Committee for the Olympic Games (ROCOG) expand the scope and impact of the program, which is designed to bring Olympic and Paralympic values to local schools, create sports-themed educational curriculum, and introduce students to new sports beyond primary national interests like football (soccer), basketball, volleyball and handball.

With support from Dow and Bridgestone, Transforma created free digital tutorials, training for educators and classroom content to engage 7 million students from more than 12,000 schools in over 2,500 Brazilian cities since its creation in 2013.

“Transforma’s partnerships with Dow and Bridgestone helped our program reach a larger number of students and teachers throughout the country,” said Vanderson Berbart, education manager of Rio 2016. “A program with strong partners will no doubt help in the process of building an educational legacy to Brazil.”

As global leaders cumulatively operating in Brazil for more than 150 years, Dow and Bridgestone applied separate approaches with the program but shared one common objective: make a positive impact in communities and leave a lasting legacy across the country through support of the Rio 2016 Olympic Games.

Aligning with its 2025 Sustainability Goals, Dow served as the premier corporate partner of Transforma and provided content focused on science and sport. Dow scientists worked in partnership with Rio 2016 educators to develop nine digital classes in physics, chemistry, biology and environmental studies that are taught through the lens of the Olympic Games.

Dow’s support helped Transforma expand to seven additional cities in which Dow has operations, including Guarujá, Jacareí, Pindamonhangaba, Franco da Rocha, Jundiaí (in the State of São Paulo), Salvador and Candeias (in the State of Bahia). As a result of this expanded reach, educators in 420 additional schools and 181,000 students benefited from training opportunities and sports festivals.

“The Olympic Movement and Transforma demonstrate the potential of sport and science, contributing to the lasting improvement of science education across Brazil," said Fabian Gil, president of Dow Latin America. “In 2016, with the first Olympic Games on our home soil, Dow celebrates 60 years in Brazil. We are able to go beyond our sustainable solutions contributing to the success of the Games, and demonstrate our commitment to the communities we call home and to building the workforce of tomorrow.”

In addition, Bridgestone reached more than 270,000 students through the creation of digital training modules for sustainability practices related to water, waste, animals and conscious consumption, as well as four television programs focused on sport and education. Bridgestone also helped organize sports festivals in these two communities that helped more than 1,200 students and 100 teachers engage with new Olympic and Paralympic sports, including diving, badminton, judo, table tennis and karate, among others.

“Bridgestone has a history of supporting sports in Brazil, and we are proud that through our Worldwide Olympic Partnership we can help advance a social legacy through sports and education,” said Fabio Fossen, president of Bridgestone Brazil. “We are honored to collaborate with a fellow TOP to support Transforma in this important work and bring the excitement of the Olympic Games beyond Rio de Janeiro.”

The Transforma Program is present in all 26 states and the Federal District in Brazil and stands as one of the greatest legacies of the Olympic Games. It also has crossed the border into more than 20 other countries, including Germany, Argentina, France, Spain, Japan, Greenland and the Netherlands, and is receiving applications from schools in the United States. Transforma’s main goal is to expand the sports menu of schools and promote the practice of Olympic and Paralympic values such as friendship, inspiration and courage. The program is now public policy in Brazil and will continue after the Olympic Games as a distance learning platform of the Ministry of Education. For more information visit www.rio2016.com/educacao/.

Dow (NYSE: DOW) combines the power of science and technology to passionately innovate what is essential to human progress. The Company is driving innovations that extract value from material, polymer, chemical and biological science to help address many of the world's most challenging problems such as the need for clean water, clean energy generation and conservation, and increasing agricultural productivity. Dow's integrated, market-driven, industry-leading portfolio of specialty chemical, advanced materials, agrosciences and plastics businesses delivers a broad range of technology-based products and solutions to customers in approximately 180 countries and in high-growth sectors such as packaging, electronics, water, coatings and agriculture. In 2015, Dow had annual sales of nearly $49 billion and employed approximately 49,500 people worldwide. The Company's more than 6,000 product families are manufactured at 179 sites in 35 countries across the globe. On June 1, 2016, Dow became the 100 percent owner of Dow Corning Corporation’s silicones business, a global company with sales of greater than $4.5 billion in 2015, 25 manufacturing sites in 9 countries and approximately 10,000 employees worldwide. References to "Dow" or the "Company" mean The Dow Chemical Company and its consolidated subsidiaries unless otherwise expressly noted. More information about Dow can be found at www.dow.com.

Bridgestone Corporation, headquartered in Tokyo, is the world’s largest tyre and rubber company. In addition to tyres for use in a wide variety of applications, it also manufactures a broad range of diversified products, which include industrial rubber and chemical products and sporting goods. Its products are sold in over 150 nations and territories around the world.