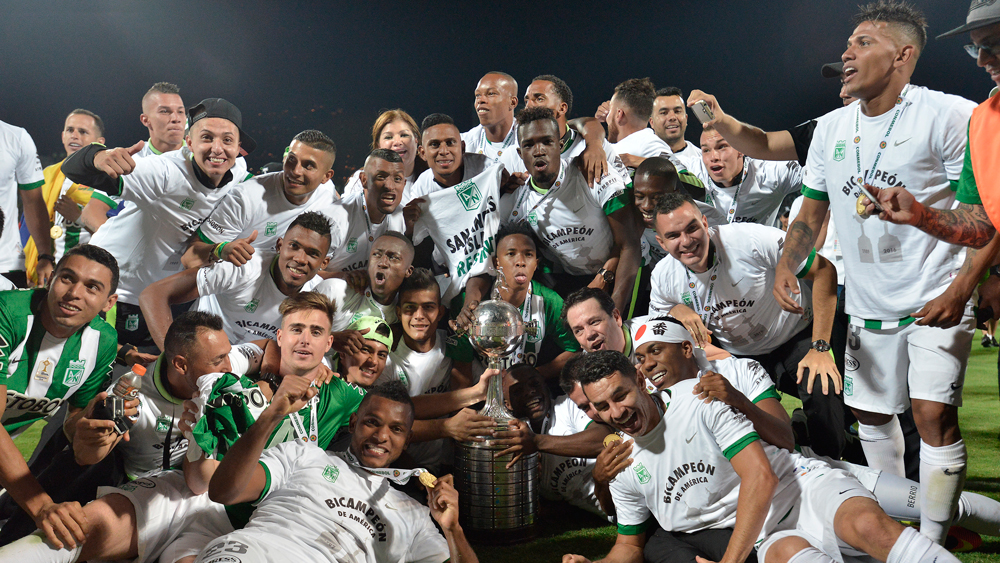 Atletico Nacional from Colombia has been crowned champion of America in club soccer after beating 1-0 the Independiente del Valle.

Bridgestone, the official sponsor of the event, presented Miguel Angel Borja with the ‘Most Valuable Player’ Award
Twitter Facebook LinkedIn

After five months of activities, 137 matches and the participation of 32 of the most important teams in the continent, the Copa Bridgestone Libertadores has come to an end following emotional finals between Independiente del Valle from Ecuador and Atlético Nacional from Colombia, which led to the victory of the Colombian team by 1-0. The Atanasio Girardot stadium in the city of Medellin, Colombia, hosted the final match in an unprecedented confrontation between two teams that surprised the whole continent with their tenacity and technical skills, hoping to etch new names in the history books of the tournament.

Bridgestone, the world’s leading manufacturer of tires and other diversified products, joined the greatest club soccer event in Latin America by sponsoring the Copa Bridgestone Libertadores for the fourth year in a row. 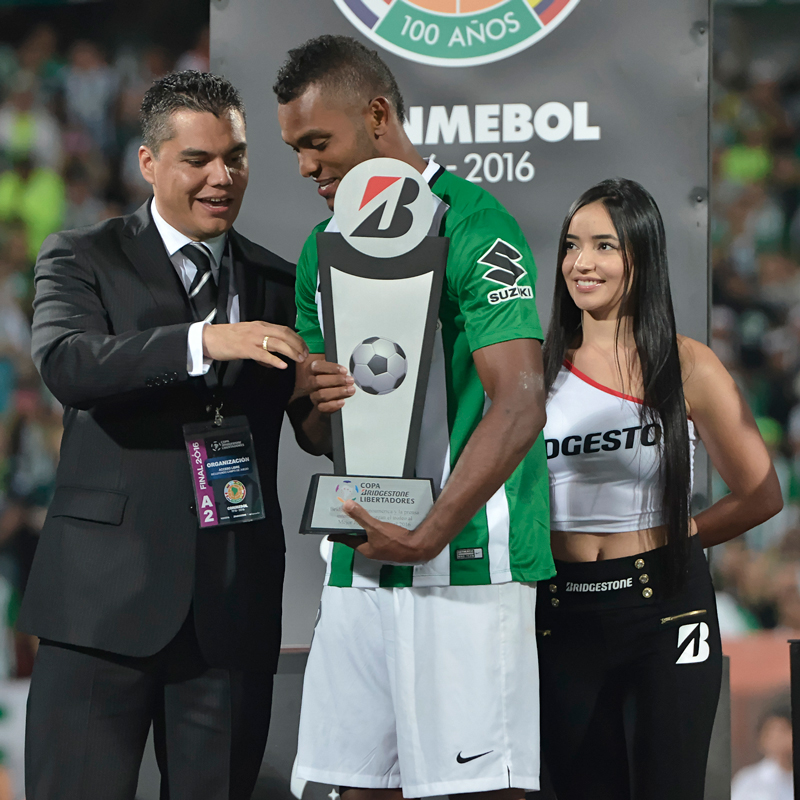 “The Copa Bridgestone Libertadores is the most important soccer event in America. We’re proud of the favorable results, which have exceeded our expectations with regard to sponsoring the competition. The multiple promotional activities the company carried out throughout the championship are certainly a reflection of the strong passion and talent of the fans,” said Ramiro Pineda, Marketing Director at Bridgestone Latin America.

Bridgestone will continue to encourage and motivate fans in Latin America to celebrate their passion for soccer by sponsoring tournaments of this magnitude and spreading soccer fever throughout social media. Bridgestone’s website (http://bridgestonelibertadores.com) reached over 2.8 million visits during the season, with its social media pages reporting over 44,000 followers on Facebook and over 6,000 followers on Twitter. The company also held digital media contests in Colombia, inviting fans to share a photo with their friends in order to try to get the most likes or to be one of the first 15 people to correctly arrange the host team’s crest in a GIF. Approximately 150 winners of the contests were invited to watch the finals of the Copa Bridgestone Libertadores in person in Medellin.

In addition, Miguel Pacheco, General Sales Manager for Colombia and Ecuador, at Bridgestone, mentioned while greeting CONMEBOL representatives, “We are pleased to be present in this major event in Colombia. In addition to enhancing the positioning and reach of the Bridgestone brand across the region, it also allows our customers and consumers to take part in the event and witness the passion for soccer, the same passion we feel when we manufacture our products and provide our services as a champion brand”,

This partnership supports Bridgestone’s ongoing commitment to sports and to the passion it ignites among fans and brand users. The company also develops and supports several competitions with the aim of promoting participatory activities around different sports and in the various regions where it operates.

Bridgestone Americas maintains an established and strong presence in Latin America through the subsidiaries that make up the Latin American Tire division (BATO LA), which is part of Bridgestone Americas Tire Operations. BATO LA, through its manufacturing and sales subsidiaries, operates six tire production plants - two in Brazil and Mexico, and one each in Argentina and Costa Rica  - along with proving grounds in Acuña, Mexico, and São Pedro, Brazil. In addition, through Bandag do Brasil Ltda. and Bandag de Mexico, S.A. de C.V., the companies manufacture and market pre-cure retread for truck and bus tires.

Bridgestone de Colombia, S.A.S., is a subsidiary of the Bridgestone Latin America North, BS-LAN business unit, which is part of the Bridgestone America Tire Division (BATO LA) and Bridgestone Americas Tire Operations (BATO), headquartered in Nashville, Tennessee. Bridgestone Colombia sells a wide range of designs and sizes of passenger, light truck and truck tires as well as agricultural machinery and off-road tires. Its sales offices are located in Bogota city, responsible of the markets in Ecuador and Colombia. BSCO markets its products through a network of dealers and retailers.