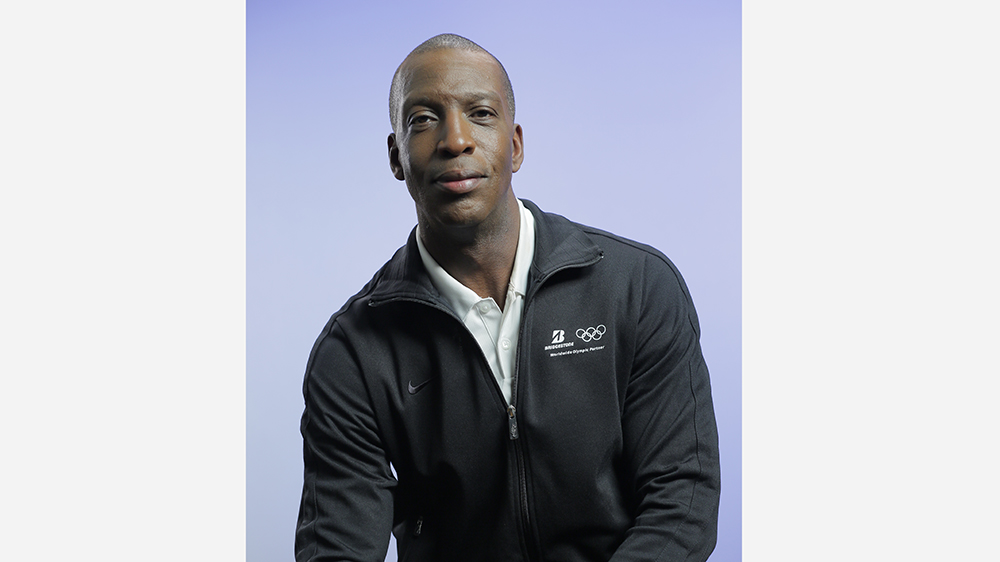 There are so many parallels between sports and business, and I’m excited to share what I’ve learned over the years about motivation, teamwork, goal-setting and perseverance with the Bridgestone team.

Bridgestone Americas, Inc. (Bridgestone), a subsidiary of the world’s largest tire and rubber company and a Worldwide Olympic Partner, has teamed up with Olympic track & field legend Michael Johnson to conduct a new internal training and sales incentive program designed to inspire Bridgestone Retail Operations (BSRO) employees in the countdown to the Rio 2016 Olympic Games. The four-time Olympic gold medalist joined BSRO during the company’s 2016 National Business Conference in Houston to kick off the new program.

Through a series of appearances, educational videos and other training tools, Johnson will share the lessons he’s learned on the track and use his world-renowned coaching techniques to empower and challenge the more than 23,000 BSRO employees at the company’s 2,200+ tire and automotive service centers in the United States.

“I’m thrilled to partner with Bridgestone and look forward to using the Olympic Games as a great motivator with its retail teammates this year,” said Johnson. “There are so many parallels between sports and business, and I’m excited to share what I’ve learned over the years about motivation, teamwork, goal-setting and perseverance with the Bridgestone team. It’s going to be a lot of fun, and hard work, too.”

As part of the program, Johnson will be featured in an Olympic-themed sales incentive program, a mobile training tour, and a trip to the United States Olympic Committee (USOC) Training Center in Colorado Springs for BSRO top performers. Later this year, Bridgestone will bring its new Olympic partnership to life through a broader consumer-facing retail marketing campaign complete with in-store, mobile activations and promotions.

“Bridgestone’s people and products demonstrate our company’s passion for performance every day,” said Stu Crum, president of BSRO. “In our stores, we are driven to perform, just like the elite athletes who are training for the Olympic Games, so who better to inspire our team than Michael Johnson, an elite athlete and coach who’s literally brought home the gold. We couldn’t be more excited to welcome Michael to the Bridgestone family and to have the opportunity to learn from one of the best.”

“Joining the Olympic Movement as one of just 12 Worldwide Olympic Partners provides an incredible opportunity to grow our business in a way that no competitor can,” added Crum.  “The training program with Michael is just one exciting way we’ll be leveraging our Olympic partnership to ignite pride and performance among our teammates at the retail level.”

One of BSRO’s long-term strategic goals is to become the most trusted provider of automotive service in every neighborhood the company serves. Bridgestone’s position as a Worldwide Olympic Partner, and alignment with the overall values of the Olympic Games and athletes, strongly reinforces BSRO’s position as a trusted neighbor and resource in the communities where the company operates.

Bridgestone Corporation proudly announced on June 13, 2014 that it has become an official TOP Worldwide Olympic Partner of the International Olympic Committee (IOC).  The 10-year partnership will see Bridgestone Corporation serve as a partner of the upcoming Rio 2016 Olympic Games, the Pyeongchang 2018 Olympic Winter Games, the 2020 Olympic Games in Tokyo, the Beijing 2022 Olympic Winter Games, and the 2024 Olympic Games.  The long-term commitment to the Olympic Movement highlights Bridgestone’s shared values with the principles of Olympism and is a natural evolution of the brand’s support for sport.

Nashville, Tennessee-based Bridgestone Americas, Inc. (Bridgestone)is the U.S. subsidiary of Bridgestone Corporation, the world’s largest tire and rubber company. Bridgestone and its subsidiaries develop, manufacture and market a wide range of Bridgestone, Firestone and associate brand tires to address the needs of a broad range of customers, including consumers, automotive and commercial vehicle original equipment manufacturers, and those in the agricultural, forestry and mining industries. The companies are also engaged in retreading operations throughout the Western Hemisphere and produce air springs, roofing materials, and industrial fibers and textiles. The Bridgestone family of companies also operates the world’s largest chain of automotive tire and service centers. Guided by its One Team, One Planet message, the company is dedicated to achieving a positive environmental impact in all of the communities it calls home.

Bridgestone Retail Operations, LLC (BSRO) is headquartered in Bloomingdale, Ill., and owns and operates more than 2,200 tire and automotive service centers across the United States — including Firestone Complete Auto Care, Tires Plus, Hibdon Tires Plus and Wheel Works store locations. Credit First National Association and Firestone Complete Fleet Care operations are also part of BSRO. BSRO is a member of the Bridgestone Americas family of companies.

Michael Johnson made history at the 1996 Olympics in Atlanta, where he became the first and only man to ever win gold in the 200 meters and 400 meters at the same Olympic Games. After winning the 400 meters and 4x400 meter relay at the 2000 Olympics in Sydney, he retired, finishing his career with 19 international gold medals and also the only male in history to win consecutive Olympic gold medals in the 400 meters.  Since his retirement from sports, Johnson has gone on to establish himself as a leading corporate motivational speaker, successful television commentator and personality, and as the president and founder of Michael Johnson Performance, which operates state-of-the-art sports training centers and provides training and consulting to professional athletes and sports teams all over the world. He continues to share his formula for success in the corporate sector, using the lesson’s he’s learned on the track to motivate and inspire the employees of some of the world’s leading organizations. Johnson currently lives in San Francisco with his wife Armine and son Sebastian.