Kuchar And Hueber, Champions of the Bridgestone America’s Golf Cup in Mexico

Birdie after birdie, showing what makes him one of the best players in the world (currently 13th in the Official World Golf Rankings), Matt Kuchar and his partner Justin Hueber positioned the United States on the top of the leaderboard of Bridgestone America’s Cup Golf presented by Value (PGA TOUR LA).

The Americans gave a master class in the final round, finishing with a score of 60 (-11), and a tournament total of 250 (-34), winning the second edition of the championship at the Club Campestre of Mexico City.

Matt Kuchar was grateful to play this tournament in Mexico, "I’m very happy. The organization has done an excellent job arranging this great tournament and playing in Mexico has been a pleasure. I would love to come back," he added.

In second place was the Puerto Rican team of Rafael Campos and Edward Figueroa who finished at 254 (-30) after an extraordinary final round of 61 (-10).

There was a tie for third place, with the teams of Colombia (Marcelo Rozo and Manuel Merizalde, 60 on Sunday) and Canada (Taylor Pendrith and Corey Conners, 63) each finishing at 255 (-29).

Of the hometown Mexican teams, the top finishers were Sebastian Vazquez and Juan Pablo Solis, who signed in at 68 (-3) on Sunday and 260 (-24) for the tournament, finishing in tenth place. 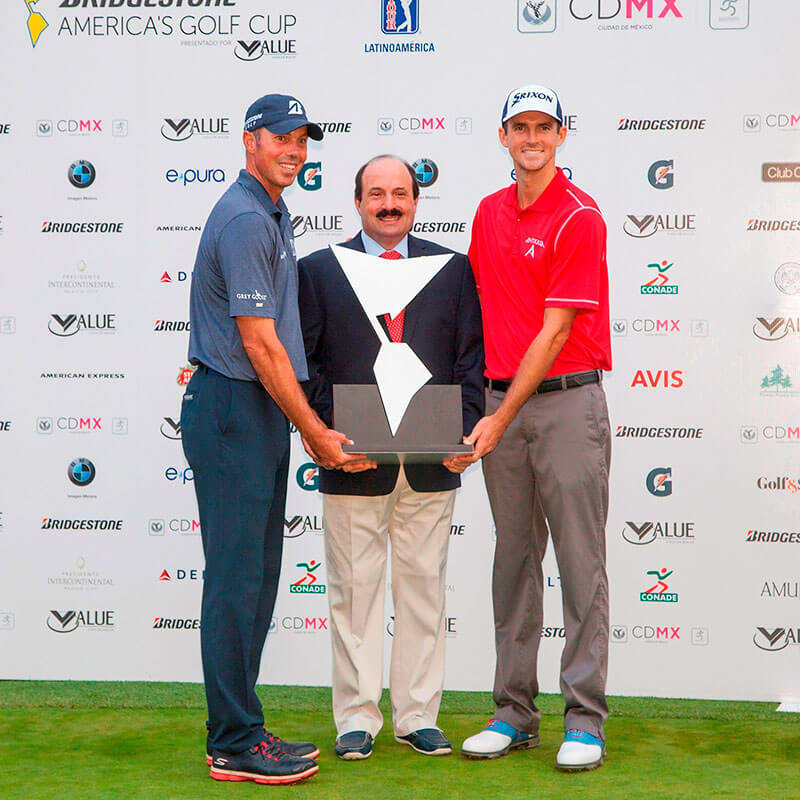 Lisandro Borges, CEO of Bridgestone America’s Cup Golf presented by Value said the event was a success, especially among the Mexican audience.

"This has been a perfect week, a tournament which exceeded all expectations, thanks to the support of the sponsors, of Bridgestone and Value, and also the Club, the Federation, the PGA TOUR LA and all and everyone involved in the tournament," Borges said. "When a country welcomes us as if it were our home, we can only be fully grateful, and that is how Mexico received us. Simply put, ‘thank you’ to all involved," concluded the CEO.

The second edition of Bridgestone America´s Cup presented by Value Golf was played with the format of 72-hole Four-ball (Best Ball), and 30 teams (60 players) representing 19 countries participated this year. The most prestigious team event in Latin America is part of calendar 2015 PGA TOUR LA and awards a purse of $300,000, one of the largest in the region.

Bridgestone Mexico is a subsidiary of Bridgestone Latin America Tire Division (BATO LA), which is part of Bridgestone Americas Tire Operations (BATO), headquartered in Nashville, Tennessee. BSMX manufactures and markets passenger and light truck tires, as well as truck and bus, agricultural and off road tires. The company owns a plant located in Cuernavaca, Morelos for tire manufacture, and a second plant for the manufacture of retread materials in Leon, Guanajuato; both plants are certified and awarded in all areas of quality and environment. BSMX markets its products through a network of dealers and retailers and provides products to original equipment manufacturers. Visit: www.bridgestone.com.mx. Facebook/Instagram: Bridgestone Mexico. Twitter: @brigestonemx