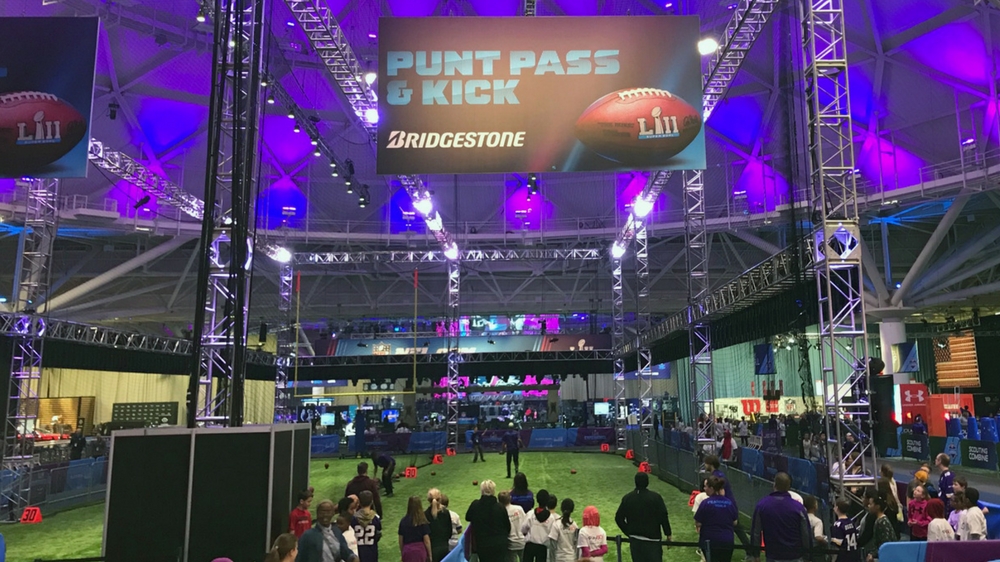 It may have been cold outside, but it would have taken much more than cool temperatures to temper the enthusiasm and fervor of football fans in Minneapolis for Super Bowl LII. With the city hosting its first Super Bowl in 26 years, fans turned out in droves to experience the activities surrounding Super Bowl LII, and the Bridgestone brand was prevalently on display.

Bridgestone, the Official Tire of the NFL, engaged with performance-minded fans through fan activation sites at Super Bowl Experience and Super Bowl Live. The activation sites provided fans with an opportunity to learn about Bridgestone’s world-class products and services, while participating in interactive experiences such as throwing a football through Dueler tires, running around obstacles with DriveGuard, kicking a field goal over Ecopia tires and diving into a foam pit to catch a pass. Bridgestone also sponsored the NFL’s Punt, Pass and Kick interactive fan zone at Super Bowl Experience.

In addition to interactive fan activation sites, Bridgestone also partnered with former Minnesota Vikings linebacker Chad Greenway to give one young fan an experience that will last a lifetime. Aligning with Bridgestone’s “Our Way to Serve” corporate social responsibility (CSR) commitment, which includes a focus on developing and serving people – especially children, Bridgestone partnered with Chad’s “Lead the Way Foundation” to help bring one deserving child to the Super Bowl. That child was Obadiah Gamble, an 8-year old former patient of St. Paul Children’s Hospitals and Clinics of Minnesota. Obadiah attended Bridgestone activities throughout the week, including Super Bowl LII.

An incredible couple weeks is all coming together this weekend thanks to a great partnership with @Bridgestone and our #LeadTheWayFoundation. @obadiahspeaks is pumped to watch #SBLII live in person! pic.twitter.com/vmbZeQMaRL

Hey @chadgreenway52! Thank you for thinking of me. And @Bridgestone! THANK YOU for one of the best days of MY LIFE! #SBLII #LeadTheWay52 #SKOL pic.twitter.com/fzntY8YjMq

Bridgestone, now in its 11th year as part of the Super Bowl, also served as presenting sponsor for the “2017 Play of the Year” at the annual NFL Honors Show, which was broadcast live on NBC. The Minnesota Miracle, which lifted the Vikings past the Saints in the NFC Divisional Round, was selected as the winning play. Bridgestone also sponsored “Performance Moments” from the Super Bowl that were featured on the video board inside U.S. Bank Stadium.