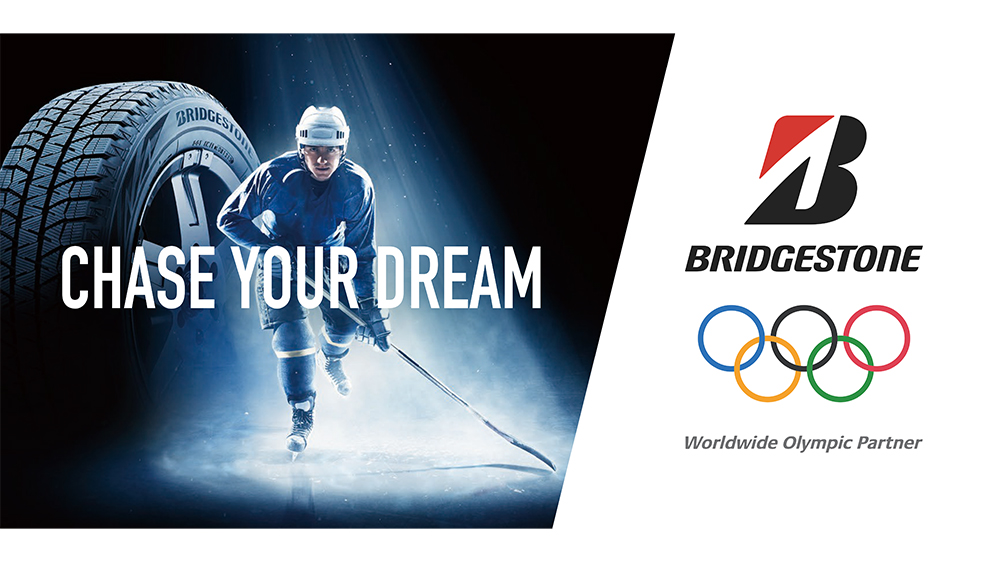 As part of its Games-time program, Bridgestone is supplying winter tires for the International Olympic Committee (IOC) vehicles within the Olympic fleet, and is supporting Team Bridgestone -- a global roster of Olympic and Paralympic hopefuls aiming to compete in PyeongChang. Additionally, the company is proud to support the official PyeongChang 2018 Education Program to help the Games leave a lasting, positive impact in the host country, and it plans to share its core Olympic message, “Chase Your Dream,” with visitors and fans through marketing efforts in the host country.

“As we count down to the Olympic Winter Games PyeongChang 2018, Bridgestone is proud to further demonstrate our commitment to the Olympic Movement, to the world’s greatest athletes, and to improving the way people move, live, work and play as aligned with the company’s “Our Way to Serve” commitment,” said Asahiko ‘Duke’ Nishiyama, Executive Vice President and Executive Officer, Bridgestone Corporation. “These Games also mark another important step forward in strengthening the Bridgestone brand on the global stage. We look forward to showcasing our high-performing products and services, growing our business in South Korea and engaging our 143,000 teammates worldwide while sharing our "Chase Your Dream” message that empowers people everywhere to persevere in pursuit of their dreams.”

As the Official Tire of the Olympic Games, Bridgestone will supply its industry-leading Blizzak winter tires for all International Olympic Committee (IOC) vehicles in the official Olympic fleet. Tires are an important vehicle safety feature, making it critical to have the right type of tire for the driving conditions. Engineered with specialized rubber compounds that remain flexible as temperatures drop, Bridgestone Blizzak winter tires provide enhanced traction in snowy, icy and slushy conditions, giving Olympic officials maximum control while traveling in PyeongChang.

Through its global Olympic message entitled “Chase Your Dream,” Bridgestone is working to bring the Olympic spirit to life in ways that empower people everywhere to overcome adversity and persevere in pursuit of their goals. In the host country, this message will be featured in Bridgestone out of home advertising visible at Incheon Airport, throughout Seoul, and near PyeongChang 2018 venues to help welcome Olympic fans, volunteers and media to South Korea. Bridgestone branding and the “Chase Your Dream” video creative also will be featured on digital signage in South Korea, as well as advertisements on digital properties like the Olympic Channel.

Athletes are the driving force of the Olympic Games and represent the heart of the Olympic Movement. They also are Bridgestone customers, who put in countless hours on the road, day in and day out, traveling to and from training and competition, no matter the distance or weather conditions. The company proudly supports more than 100 athletes in various sports around the world who are members of Team Bridgestone. This roster includes more than 50 Olympic and Paralympic heroes and hopefuls across 10 countries who embody the company’s “Chase Your Dream” message and work as athlete ambassadors to serve as the face of Bridgestone activities.

Leaving a Legacy in South Korea

In December, Bridgestone announced a partnership with The PyeongChang Organizing Committee for the 2018 Olympic and Paralympic Games (POCOG) to support the PyeongChang 2018 Education Program. The company’s support allowed the official education program of the Olympic Winter Games to expand its reach to a new group of students – the children at Shin Mang Won Orphanage in Gyeonggi Province, Yangpyeong-gun.

On Sunday, Dec. 3, Bridgestone and POCOG co-hosted “PyeongChang Day” at the orphanage, in which children experienced Olympic sports and learned about the Olympic values of friendship, excellence and respect. In January, the company is hosting a group from Shin Mang Won when the Olympic Torch Relay passes through Seoul, and in February, Bridgestone will provide Shin Mang Won children a once-in-a-lifetime opportunity to experience PyeongChang 2018 first-hand when it hosts them in a VIP spectator program at the Olympic Winter Games.

A Commitment to the Region

Bridgestone has more than 65,000 teammates and 104 locations in Asia Pacific overseeing operations and supplying products throughout the region. Bridgestone Tire Sales Korea, Ltd. (BSTK) has proudly operated in South Korea since 2001. Headquartered in Tokyo, Bridgestone Corporation has more than 143,000 employees globally working to supply a wide range of innovative, high-performing tire and diversified products to more than 150 nations and territories around the world.

Ongoing Support for the Olympic Movement

In addition to the company’s support of the Olympic Movement as a Worldwide Olympic Partner, Bridgestone Corporation became the first Founding Partner of the Olympic Channel in August 2016, signing a four-year agreement to support the ground-breaking digital platform in its mission to celebrate the Olympic Movement and the world’s greatest athletes every day of the year. Bridgestone Corporation also is a Tokyo 2020 Paralympic Games Gold Partner and will support the Japanese Paralympic Team through 2020; Bridgestone Americas also is supporting U.S. Paralympics through 2024.